Finding Your Authentic Self: It’s Not Two Journeys, It’s One

At #SGCSummit2017, Refound founder and CEO Jonathan Raymond shared his powerful journey to authentic leadership as part of our Long Story Short leadership talks. Read on and watch the video to hear his story.  Looking for more authentic talks? The theme for the #SGCSummit2018 is authenticity. Register here!

In 2014, Jonathan Raymond realized he had been living a double life for the past 41 years.

The professional half of that double life began in 1998 when Jonathan graduated law school in New York and went on to work at a corporate law firm in New York City. As a young junior associate in a big office in an NYC skyscraper, Jonathan’s idealistic aspirations of success were quickly disillusioned. He was denied mentorship and support, and he stood on the sidelines as his colleagues gossiped about one another behind closed doors. Life in the bowels of a corporate law firm turned out to not be much fun.

It didn’t take long for Jonathan to make a change. He was restless, single, and depressed. He had spent his entire life in New York and he didn’t know the world — but he really wanted to. There was another side of his life that had started to emerge as he studied the bar and went on to his first job. He had met a mindfulness meditation teacher, and it sparked something in him. As he explored ideas around meditation, yoga, and counseling, he found himself wondering about this amazing, magical, and mysterious thing called the authentic self. Where could he find it?

After leaving his corporate job at the law firm, he decided to travel to Vermont and sit in an 8-day meditation retreat. Something happened to him over those 8 days — it’s not that he became enlightened, but he did experience a new kind of connection between himself and the world around him. Having grown up in an aspiritual, agnostic family, the feeling was very new to him. He was captivated, and determined to ride that train as long as he could and to wherever it would take him.

Jonathan wanted to find a place where his double life — his professional self and personal self — could peacefully coexist. With few personal responsibilities, he moved himself to San Francisco. For ten years, that's where he lived out his double life.  By day, he worked in business; he was employed at a dotcom company and he even helped to start a nonprofit. But his heart was still in the search. He felt no closer to discovering that thing called his authentic self and who he really wanted to be. The gap between who he felt like he was inside and the kind of person he wanted to be in the world was still there, and it was driving him crazy.

What if Personal and Professional Growth are the Same Journey?

Suddenly, all of that changed. Jonathan had always wanted to find a spiritual mentor. Someone who could see the strange person he felt like he was and help him make sense of it. Jonathan had always felt like someone who never really fit in. He came across a personal growth teacher, and when they spoke, it felt like someone finally understood who he was. Finally, Jonathan had found a teacher who understood the best and worst of him, and who spoke in a way that moved him. So, Jonathan followed the teacher to Ashland, Oregon, and started working with him on an intense level. He wanted to become a facilitator of the work his teacher was leading — it was all about discovering the emotional underpinnings of the decisions we make, helping to teach that we are not mind-first beings, but rather emotion-first beings.

However, after some time, Jonathan realized at the same moment that his relationship with his spiritual teacher and his professional life were not healthy.  After hitting a personal rock bottom, he started to rebuild. Together with his wife Alex, they looked at the pieces that remained in the wreckage. Then, they had an epiphany about the personal and professional growth that he had been so aggressively pursuing. What if holding those two things as separate had been the problem all along? What if the idea that personal growth and professional growth is two journeys — what if that was his problem? What if he had inadvertently become the poster child for living that split all the way out, as far as you possibly could? For his entire adult life, Jonathan had been trying to get better at work during the day and trying to get better at himself on the weekends. It wasn’t working.

With nothing to lose, he went back to work. He let go of his position as CEO, and instead became a Chief Brand Officer. He still had a lot of authority, and more importantly, he was still managing the majority of the people in the office. He started doing things a little differently. He had noticed a gap between the values they stated and the actual work and conversations taking place in the office. There was a lack of engagement and curiosity in conversations between managers, leaders, and their direct reports, and they weren’t living out their core values.

A Commitment to Facilitate the Individual Growth of People

Jonathan decided to see what would happen if he started his day with one mandate for himself. He promised he would spend his day facilitating the individual growth of the people that reported to him. As he started having more one-on-one conversations and listening to his direct reports more deeply, some really amazing things started to happen. Take a young woman on his team — she was a very smart, capable professional. But Jonathan noticed that in meetings, she was very reluctant to share her opinions. Jonathan took her aside, explained the pattern he had noticed, and asked her what she thought about it. They had one conversation, and then a more layered conversation shortly after. She shared that she wanted to speak up more, but she wasn’t sure how that would look. Together, they conducted micro-coaching moments over the next six months where she could put herself in the position to speak up and stretch herself.

Jonathan realized that she had simply been relying on her strengths and not growing this other part of herself. She was very methodical, very productive, and she had been over-relying on those muscles for a long time. We all rely on our strengths, whether that be writing code, working with customers, or writing business plans. As he repeated this process across the company, the experiences lit up the entrepreneur button in his mind, and he realized he wanted to start a business around this work. 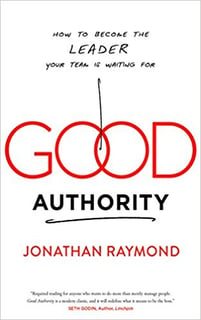 Jonathan realized that what he was most interested in was the actual conversations between leaders and the people that report to them. He kept seeing a gap in the stated values of businesses and their moment-to-moment transactions. In the spring of 2015, Jonathan decided to start his own business to provide leadership training to high-growth organizations, Refound. He also wrote a book on the same ideas, Good Authority: How to Become the Leader Your Team is Waiting for. Then, he waited. He wasn’t sure if anyone would resonate with these ideas — he worried that he might’ve invested all this money and nothing would happen.

At first, that’s exactly what happened. He launched his business and was largely met with silence. It would take time for him to build an audience and begin to get the word out. But at the end of 2016 and the beginning of 2017, interest started to build. A company in San Francisco approached him and shared that they loved his message and that he had put words to the exact issues they faced. Then another company came, and another. The floodgates opened, and now Refound is steadily growing. Ultimately, when Jonathan stopped living his double life and found a way to merge his personal and professional growth, he finally found his authentic self.

After twenty years of not being able to decide whether he was a “seasoned executive” or a personal growth teacher, Jonathan stopped trying to figure it out. He’s the owner of Refound, an advisory firm that offers leadership training and coaching for owners, executives and managers. He’s madly in love with his wife, tries not to spoil his daughter, and will never give up on the New York Knicks. Jonathan is the former CEO and Chief Brand Officer of EMyth, where he led the transformation of a global coaching brand, and has worked in tech, clean tech, and the nonprofit world after graduating law school in 1998. He lives in Ashland, Oregon, a lovely town that’s too far away from a warm ocean.

Brewing a legacy: Is employee ownership right for you?

Growing with Purpose Podcast: From "Un" to Fun with Conni Reed

Feeling the Pain of the 'Great Resignation'? How to Stem the Tide of Turnover