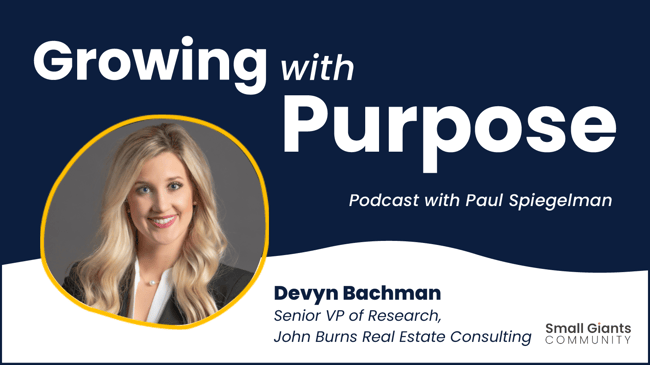 On this episode of the Growing with Purpose podcast, host Paul Spiegelman speaks with Devyn Bachman, Vice President of Research at John Burns Real Estate Consulting.

Devyn grew up surrounded by the entrepreneurial spirit. While her parents ran a 20-seat hair salon in Colorado, Devyn grew to love the idea of creating something on one's own, but also to respect the relentless hard work that it takes to make a business a success.

Devyn was the first in her family to attend college, and, for the majority of her academic career, was also a dancer on the Denver Nuggets dance team. This terrific opportunity allowed to travel the world, all while pursuing her passion for dance.

And she didn’t stop traveling after that. When Devyn’s now-husband proposed to her during their senior year of college, he was also just about to begin his career in the NHL. This meant moving houses, cities, and even states, at an alarming rate for over a decade.

“You wouldn’t believe the people I have met along the way. It’s absolutely been a thrilling adventure at every turn.”

Now, Devyn has been a part of the JBREC team for seven years, and she credits the company’s founder, John Burns, with his innovative approach to remote work - or rather, what they call connected work - in part for her ability to remain at one company and develop her leadership skills over those years.

Tune in for this episode as Devyn and Paul discuss her experience on student council in high school, the ups and downs of constantly being on the move, and the merits of working at a company that values leadership in a variety of ways.

Listen to Devyn's story below: