Growing with Purpose Podcast: "From Delivery Driver to CEO" with Kornel Grygo

On this episode of the Growing with Purpose podcast, host Paul Spiegelman talks with Kornel Grygo, the newly-named CEO of Tasty Catering.

Kornel Grygo grew up in Poland until he moved to the United States at the age of ten. His childhood was defined by working hard and taking responsibility, two traits that would serve him well as he climbed the ranks at Tasty Catering. Kornel originally came to Tasty Catering as a front-line employee over a decade ago, working as a brand ambassador and a delivery driver. Kornel was a perfect match for Tasty's values-based, high-performing culture and the company continually invested in his growth and development — even enrolling him in a leadership development program with the Small Giants Community in 2016. Earlier this year, Kornel was named CEO of Tasty Catering.

In this episode, Kornel shares his early lessons on leadership and explains how Tasty's strong culture helped make his transition to CEO successful. Tune in to Kornel's story below: 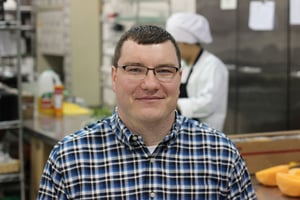 Kornel Grygo first joined the team at Tasty Catering in April 2007 and has hit the ground running ever since. Kornel started out as a brand ambassador and quickly became a top performer for high-profile deliveries and running large events. Not even three years later, he was promoted to director of logistics, overseeing 15 of their full-time drivers and over 150 part-time seasonal employees. In this role, he demonstrated a strong dedication to his team and an unwavering commitment to the quality and service that Tasty Catering is known for. Then, in 2016, Kornel was promoted again to chief revenue officer. He was instrumental in the increased revenue of corporate drop-offs, full-service corporate events, picnics, weddings and other formal events. With his recent appointment to CEO in January, he continues to prove why he has what it takes to continue to carry out the Walter brothers’ leadership legacy.