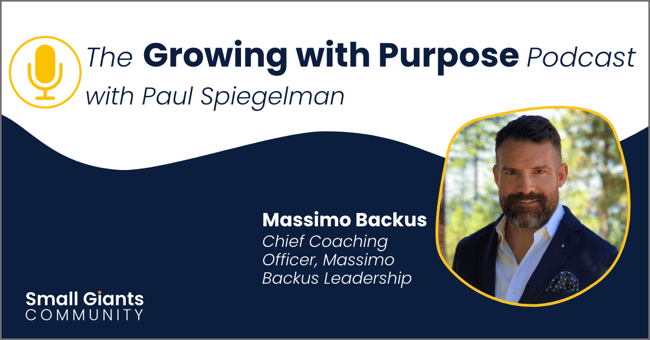 On this episode of the Growing with Purpose podcast, host Paul Spiegelman speaks with Massimo Backus, Chief Coaching Officer of Massimo Backus Leadership.

Massimo’s path to leadership was not a straightforward one, and was heavily influenced by his struggles with dyslexia growing up. As he says, “that challenge both motivated me and put a chip on my shoulder.”

Despite having a supportive family, he felt “othered” in school, and so, understandably, his relationship with academia was fraught with resistance. After entering and then dropping out of college, he picked up several jobs which led him to his curiosity in psychology and how teams organize themselves. He then went on to get an undergraduate degree in Psychology, and a master’s degree in Organizational Behavior Psychology. This eventually led to his passion for working with leaders to fulfill their potential, and practice self compassion.

Listen to this episode to discover the three components of self compassion Massimo lives by, and how, when his own leadership was viewed negatively, he took the time to look internally at how he could improve himself for his own benefit, and that of his team.

Listen to Massimo's story below:


Book that Inspired Massimo:
Atlas of the Heart by Brené Brown