Ace Metal Crafts Company, a stainless steel fabricator, has always taken an inside-out approach to business. When CEO Jean Pitzo took over after her father retired in 1989, she had no idea how the business made its products. So, she turned to the employees for answers. It’s no surprise that the company took the same employee-led approach for identifying and defining its core values and purpose. In a company where one third of the workforce has a first language other than English, it was a no-brainer to translate their core values into languages that reflect the people who live them every day.

Still, those are the kinds of thoughtful practices that separate Small Giants companies from the pack. In 2018, Ace Metal was recognized as one of Forbes Small Giants: Best Small Companies in America. Ace Metal’s approach to defining, translating and living out core values is inspiring — let’s explore how Ace Metal's values-driven culture works. 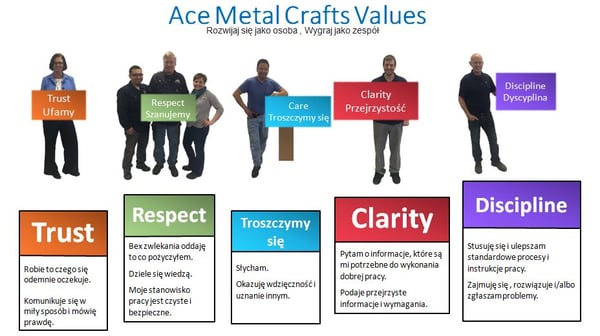 About ten years ago, Ace Metal started the process of identifying its core purpose, values, and vision. They’d always had a set of values in place, but what those words really meant was left to interpretation. Especially when you have many different languages in the workplace, how do you make sure that people really know what your core values mean?

As Ace Metal Chief Relationship Officer Deb Benning put it, “When people feel cared for, they give you that extra effort.”

Sharing your core values in the different languages that your employees speak not only ensures that everyone deeply understands what your values mean, it also shows respect and care for who your employees are as individuals.

At Ace Metal, they’ve translated their core values — and definitions for each — into Spanish, Polish, Serbian and Vietnamese.

Deb and the leadership team started a nine-month process of identifying what each of their values meant to different people. They surveyed everyone in the organization in five different languages, capturing all of the different definitions that the values inspired. The final behaviors were 2-3 definitions that everyone could agree on — for example, everyone agreed that caring means you listen to one another, and you express gratitude for others. The behaviors for each core value became guideposts for how everyone in the organization would manage themselves.

When everyone understands and respects core values, the culture flourishes. At Ace Metal, the process has resulted in a team that works together to be better, faster, and smarter. When there’s a problem, they look to their core values to talk about it. For example, Ace Metal is a manufacturing company, so many of the issues that crop up take place on the factory floor. Employees work in two shifts, and they often borrow tools from one another. But if someone borrows a tool during the first shift and doesn’t return it, the person on the second shift thinks their tool is missing or stolen. It became enough of an issue that a team member brought it up and cited it as a violation of "Respect," one of their core values. It was enough of an issue that they added the behavior to their definition of Respect: When you borrow something, return it promptly.

Your core values are more than words on a wall, they’re brought to life every day by the behaviors and actions of the team. There are endless creative, meaningful ways to live your core values — here are a few tips from Ace Metal:

Make it a game. Core values can be (very!) fun. Hang creative, artistic signs around the office to display your core values and their definitions. Gamify core values with team quizzes, friendly competitions, and employee-powered recognition programs.

Values videos. Some people are visual learners. Value videos help explain core values in another way. Videos are also a great way to feature new voices and different perspectives within the company. During Ace Metal’s Value of the Month program, they shared videos of employees discussing company values in their native languages.

Performance reviews. Core values should be part of every conversation about employee performance. During performance reviews, invite employees to share examples of how they live out each value. If there’s a performance issue, tie it back to a core value. For example, if someone’s not listening to a team member, that’s a violation of the Care core value.

Emotional Intelligence training. Training and development is a crucial component of any Small Giants company. How are you cultivating employee growth? Ace Metal’s emotional intelligence classes are open to all employees. The workshop consists of a series of 8 courses that teach soft skills like self-awareness, emotional intelligence, communication, and even forgiveness. The idea is to improve the lives of employees, both at home and at work. The course is available in English and Spanish, with plans in the works to translate the course to even more languages.

Learn how you can take core values from just being words on the walls of your office to being evident in employee behaviors.

Check out "Bringing Your Core Values to Life in Everyday Behavior"